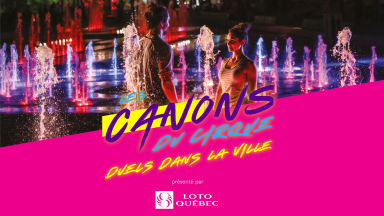 A new and breathtaking online series The 1st duel challenges Léonie perched on a 3 ton container hanging from a crane to Mathys and Jesse on a trampoline on a truck across the river, at La Ronde, at the foot of the Goliath. **VOTE FOR YOUR FAVORITE ARTIST ON OUR FACEBOOK PAGE! For this 2nd duel, Anthony Boulay on a slackline above the Peel Basin challenges Emile Mathieu on a unicycle on the Atwater Market footbridge. **VOTE FOR YOUR FAVORITE ARTIST ON OUR FACEBOOK PAGE! 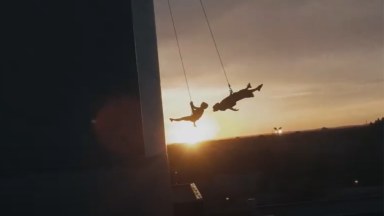 For this 3rd duel, it is a battle of couples that we propose to you! Jérémy Saint-Jean and Justine Méthé-Crozat in hand-to-hand in the heart of the fountains of the Place des festivals in the Quartier des spectacles, Montreal challenge Théodore Spencer and Laurence Racine in vertical dancing on the TOHU. VOTE FOR YOUR FAVORITE ARTIST ON OUR FACEBOOK PAGE! Battle 4: Challenge of the steps

For this 4th duel, we bring you a real juggling marathon! Natasha Petterson juggling on the steps of Mount Royal challenges Dominique Bouchard and Jérémie Arsenault in diabolo on the stairs of the Dendrite work. VOTE FOR YOUR FAVORITE ARTIST ON OUR FACEBOOK PAGE! It's already the last episode of the series and for this 5th duel, we're taking you up high! Leah Wolff hooping in front of Ola Volo's mural in the Mile End challenges Camille Tremblay balancing on the Olympic Stadium's pole. VOTE FOR YOUR FAVORITE ARTIST ON OUR FACEBOOK PAGE! After keeping you on your toes all festival long with breathtaking challenges, it's time to announce the big winners of the Duels in the City

One of the highlights of this 2021 edition is the spectacular video series LES CANONS DU CIRQUE: DUELS DANS LA VILLE, conceived and directed by Sarah Beauséjour and broadcast exclusively online, inaugurating this new digital creation in grand style! Inspired by "battle" style confrontations, this creation directed by Kiril Shmidov proposes five epic duels, putting forward the audacity, the surpassing of oneself and the immense risk-taking inherent to the circus.

At the same time, the beauty of the city of Montreal is highlighted, with each challenge taking place in a key location in the city, resulting in breathtaking performances and views! A balancing act on the roof of the stadium tower, a unicycle on the railing of a bridge of the Lachine Canal or hand to hand, in the heart of the fountain of the Place des Festivals.

A dynamic, modern and urban concept that illustrates the circus and the city like never before! The public is invited to vote for its favorite performance, at each capsule, and the five winners will be revealed at the end of the Festival!