A fascinating journey into the world of shapes!

"One day a kid planted three little dots. And they grew into lines…”

Piste, piste, piste is an interdisciplinary performance for children and young audiences, combining contemporary circus, dance and visual arts.
The performance is a fascinating journey into the world of shapes and creativity, in which a blank white stage transforms into an imaginative universe with the use of old overhead projectors. The work is based on the children’s book “Três pontinhos” (three little dots) by the author/illustrator Mario Vale.

Giving continuity to the research started with their previous performance Portmanteau, Luis and Mira explore the use of handmade visuals executed live on old overhead projectors, to build a dynamic and poetic visual environment.

Not underlining but rather suggesting, the performance sensitively builds up around the journey of two characters who discover three little dots… Through movement, illusion and circus skills, the performers play with the transformation of dots into lines, using the overhead projectors to create different situations and universes in which they travel through, leaving space for the children’s own imagination and interpretations. 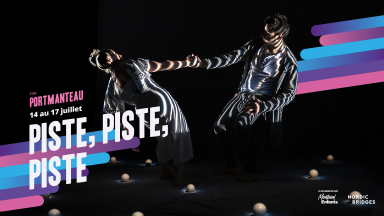 "Non-verbal Piste, piste, piste is a playful and atmospheric story of growth and change with gentle humour that is captivating"

Portmanteau is a contemporary circus company from Finland, focused on creating multidisciplinary performances exploring the dialogue between circus and other art forms.

In a constant search for new and poetic aesthetics within the performing arts, Portmanteau is a collaboration between the circus/visual artist Luis Sartori do Vale and the dancer/circus artist Mira Ravald.

With its first production, the multidisciplinary performance Portmanteau, the company has received the Sirkuksen Lumo Award 2018, as an acknowledgement of the work done to promote Finnish circus arts. In 2021 it was nominated for "Outstanding Emerging Company" in the new "International Circus Awards".

It has been touring internationally since 2018, warmly received by both audience and critics alike.

The presentation of *PISTE, PISTE, PISTE *is made possible through the participation of NORDIC BRIDGES 2022 in collaboration with Harbourfront Center, Toronto and with the support of Icelandair as the official transportation partner of the artists.

With the participation of :